Jhon Jairo Velásquez Vásquez, alias Popeye, was released on August 26, 2014 after serving twenty-three years and three months in a maximum security prison. In a clear message to young people, he shares his movingl life experiences, uncovering the sad reality of the country, the corruption of its political class and its institutions in the midst of the drama of thousands of prisoners, some guilty and others innocent, in the overcrowding and dehumanization in many prisons that lost the support of Plan Colombia. Nevertheless, the professional work carried out in prisons like Cómbita Prison in Boyacá is successfully resocializing many prisoners. Jhon Jairo Velásquez is one of them.

As a privileged witness, from the Receptions yard Popeye has seen the fall of major drug traffickers, guerrilleros, and paramilitary fighters; actors in the cruel war that continues to bathe Colombia in blood.

I’ve paid my dues to society by serving my long sentence, but perhaps I haven’t earned His indulgence . . .

Oh my God, I’ve lived so many different lives!

I survived Pablo Escobar Gaviria, El Patrón (The Boss), and it was the strength of his indomitable spirit that kept me going all these years; I don’t quite know how or why. I still feel his presence every day of my existence. The Medellin cartel’s crimes weigh as heavily on my shoulders today as they did yesterday. My youth, wasted in crime, became the sword that now hangs over my graying head.

“Popeye” The Hitman – 23 years and 3 months in prision 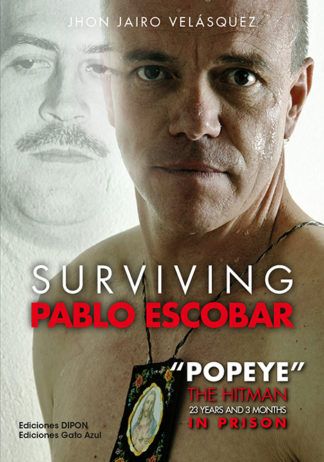